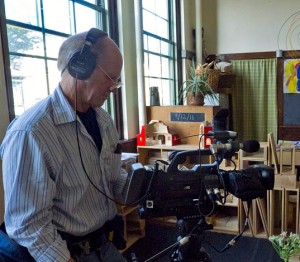 Tom Valens has been involved in film and video since the mid 1960’s, working as a cameraman and editor for television news and documentary departments, for independent producers, and for himself.  As editor, his films have won local and national Emmys as well as an Academy Award nomination.  Recent documentary films that he filmed and edited include InSpirit (2001) about quadriplegic activist Aneice Taylor, Leaf and Water (2003) about Chinese teas, and Nuclear Deception(2005) made for Helen Caldecott’s Nuclear Policy Research Institute.  He was second camera for Les Blank’s much acclaimed All in This Tea (2007).  AUGUST TO JUNE: Bringing Life to School (2011), has received much praise from parents and educators across the country.  An earlier film about teaching, To Make A Difference (1985) won a CINE Golden Eagle and a Silver Screen Award, and was widely used by schools of education.

Amy Valens’ first teaching position was as elementary art teacher in the public schools of Dayton Ohio.  After a year at Modern Playschool and Playmountain Place, an independent Summerhill based school in Los Angeles, she returned to public school teaching in Northern California.   She became part of the Open Classroom of the Lagunitas School District in 1974, and held many positions there, finishing her career as the 3/4 classroom teacher.
Amy is the author of two children’s books JESSE’S DAYCARE, (Houghton Mifflin 1990), and DANILO THE FRUIT MAN (Dial, 1993).  She retired from full time teaching in June of 2006, and began her new career in video production/direction (with a large dose of writing thrown in) working on the feature length documentary filmed by her husband, AUGUST TO JUNE Bringing Life to School, that followed her last class.  She learned the ropes of sound-work ‘on the job’ during this latest collaboration.

The Valens’ live in Forest Knolls Ca. They have two grown children who attended the Lagunitas School District’s Open Classroom.   This is their second joint project.